„Strengthening the European and Monetary Union”: my speech at the European Institute Washington during the Annual Meeting of the IMF and the World Bank Group

„Strengthening the European and Monetary Union”: my speech at the European Institute Washington during the Annual Meeting of the IMF and the World Bank Group 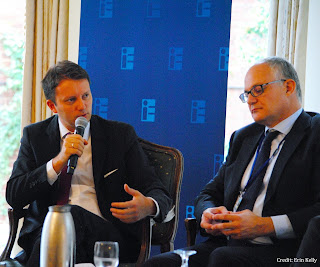 On Thursday, October 6, I spoke about strengthening the Economic and Monetary Union at the European Institute during the annual meeting of the International Monetary Fund and the World Bank Group in Washington DC.
When we speak about the future of the Economic and Monetary Union, we have to look at the causes of the recent financial crisis and the current state of play.
What were the causes of the crisis?
The causes of the last crisis were too much debt, too little competitiveness, a shaky banking system and partly the incomplete governance of the euro area, amongst others. An overly indebted Member State does not have the fiscal capacity to react once it is hit by an external shock.
What rules are in place?
The Stability and Growth Pact is in place, reformed by adopting the Six-Pack, the Two-Pack and the Fiscal Compact. These rules are essential to comply with for all 28 Member States. Debt means vulnerability, thus, it is of utmost importance that these rules are respected. The lack of responsibility of one country is a risk for the European Union as a whole, because one country not adhering to the rules can affect the economy of all Member States. We cannot pretend that more flexibility in fiscal rules strengthens the economy of a country. More debt also increases the vulnerability in face of the next crisis.
Competitiveness at national level
Investors will only invest in strong, competitive and trustworthy economies. These investments will eventually lead to growth and job creation. The reforms needed to improve competitiveness and to achieve gains in productivity, have to be transposed at national level. Using the example of some Member States that implemented structural reforms before the crisis, shows how big the gains of competitiveness can be.
Competitiveness at European level
The European Commission puts forward country-specific recommendations every year that state very precisely the reforms each Member State should transpose to strengthen its economy. Unfortunately, these CSRs are in large part not implemented. In addition, the European Central Bank has repeatedly asked the Member States to implement structural reforms to accompany its monetary policy. Therefore, we should think about how to construct a budget for the euro area, which can incentivize structural reforms with the limited financial resources it will have at its disposal.
Banking Union
In the past, banks have been a vulnerability for the European economy. Banks in the EU should never again pose a risk for the economy and the savings of the people. This risk will be reduced with the creation of the Banking Union. A European Banking Union means safer banks, which are focused on their initial function of serving and crediting the economy, small and medium sized enterprises, entrepreneurs and consumers, and less serving the speculators. The Banking Union is based on the Single Supervisory Mechanism, the Single Resolution Mechanism and in the future, a European Deposit Insurance Scheme (EDIS) will be part of it as well. There is a long way to go for EDIS to be in place. One important issue to be resolved is the avoidance of moral hazard. In the industry of insurance, moral hazard and risk always appear. However, the risk has to be minimized, which is an essential precondition to gain broad support among stakeholders for the completion of the Banking Union. EDIS is a project of risk sharing, but risk sharing has to be reduced at the same time. There is common understanding for the need for EDIS, but divergences between policy makers in terms of content, timing and conditions are still present. Likewise, deposit guarantee schemes, which are working well at national level, should not be affected by harmonization at European level.
Euro area governance
The euro area remains a trustworthy currency, as can be seen by the continuous enlargement throughout the crisis. Joining the euro has brought about benefits to all countries that have adopted the common currency in the course of the past years, for instance greater choice and stable prices for consumers, increased security and more opportunities for businesses and markets as well as closer economic and monetary cooperation that allowed the internal market to develop further.
Brexit
I believe that the exit of the UK from the EU will lead to even greater convergence among the euro area and non-euro area countries. Denmark is the only Member State without the obligation of joining the euro once it would fulfill the criteria, while all other remaining Member States are bound by their Accession Treaties to the EU to join the common currency. All future projects for the development of the euro area will need to be open to all Member States outside the euro area. It is also in their own interest to join common projects, which prepare them for their euro accession.
In conclusion
All in all, we should invest more in preventing the next crisis, which is economically cheaper and politically simpler to implement, than trying to managing a crisis once it has hit us.
By Muresan Siegfried|2016-10-07T14:43:00+00:00octombrie 7th, 2016|Categories: ECON, European Union, IMF, Siegfried Muresan|Comentariile sunt închise pentru „Strengthening the European and Monetary Union”: my speech at the European Institute Washington during the Annual Meeting of the IMF and the World Bank Group
FacebookTwitterLinkedInPinterest